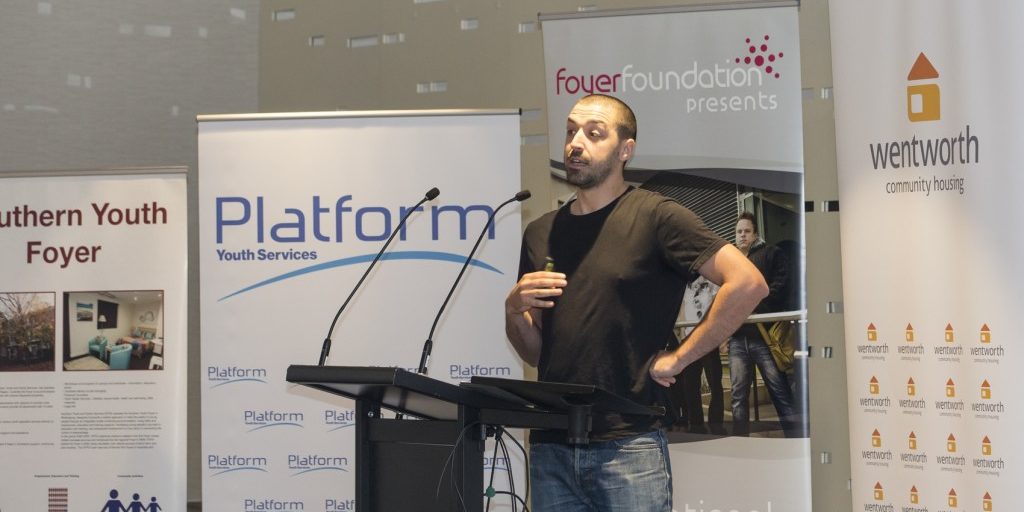 Leederville in Perth’s inner city has become one of the city’s most desirable neighbourhoods. Its bustling retail and café strip is usually filled with students and young workers employed in creative pursuits – though COVID 19 related events this last week have made for a more subdued atmosphere.

But let’s cast back to earlier times – and hopefully a return to normal before too long.

When Foyer Oxford opened its new building in Leederville in February 2014, the suburb’s revitalisation was still in its infancy, but its vibrant character has been accelerated by the Foyer’s presence on Oxford Street.

Oxford Foyer, adjacent to North Metropolitan TAFE, is the largest Foyer in Australia – and anywhere else in the world.

It accommodates 98 young people at any one time who have been, or are at risk of homelessness, and live in furnished, one-bedroom units and larger units known as penthouses.

In addition, it has a ground floor commercial tenants who include a Pilates studio, a café and the offices of the Youth Affairs Council of WA.

“The intention always was to go big,” says Oxford Foyer manager John Thompson of Perth’s only Foyer. A joint venture of Anglicare WA, Foundation House and the adjacent North Metropolitan TAFE, Oxford Foyer was, in part, a response to the level of homelessness in WA at a time when housing unaffordability was exacerbated by the mining boom.

A youth worker in his native Scotland before he moved to WA, John was closely involved in the planning and development of Oxford Foyer.

“In fact, during its two years of construction we operated a prototype Foyer in a pre-existing 13 unit building close by.”

Foyer Oxford apartments are designed for people aged 16 to 23 who are motivated to connect with employment and training.

There are 24 units for young parents and their kids and residents with disabilities are also catered for.

Like all accredited Foyers in Australia, Oxford Foyer and its residents make a commitment to each other which is called the ‘Foyer Deal’.

It’s a ‘something for something’ agreement. In what is known as ‘The Deal’ ,young residents sign a tenancy agreement and commit to attend school or undertake a course. They alsoagree to work one on one with a Foyer case manager to plan and achieve their goals.

The Foyer’s residents are a diverse bunch but at any one ime its cohort might, on average, be composed of six per cent who are in the NDIS scheme, 15 per cent who identify as Aboriginal and Torres Strait Islanders and 25 per cent who have had a prior care experience.

About 60 per cent of residents  have a diagnosed mental health condition which puts it in accord with most statistics – the rate of mental health is higher among homeless youth compared to others aged 16 to 25 years old.

Of those living at the Oxford Foyer, about 30 per cent study at North Metropolitan TAFE and the others are working or studying at other universities or schools.

John says the fee structure is about preparing residents for their exit from the Foyer which should be within one or two years of entering.

“We want to break dependency, so subsidised rent can be limiting.”

Foyer Oxford does not initiate a leadership program among residents as some other Foyers do.

“We have in the past, but it wasn’t a particularly positive experience for the rest of the community,” John says.

While 20 to 30 per cent of residents are actively involved in the life of the Foyer community, many others are happy to live their lives independently pursuing their own goals and plans.

However, as is part and parcel of the Foyer ‘deal’ across Australia, Foyer Oxford residents work with staff and case managers to work on their goals and this can involve placing them into specific projects that match their interests and talents.

“We have strategic partnerships, so we increase the offer of what young people can set out to do.”

As the Foyer’s website explains: “We work closely with Leederville Connect, the local business and residents’ association, and welcome Leederville residents to learn more about Foyer Oxford during our public open days and events. We also prioritise volunteer registrations from people who live locally.”

A survey of the 500 young people who have moved through the Oxford Foyer since it opened shows that 93% of them went into sustainable ‘positive accommodation’.

“Most go to private rental and a third have a positive reconciliation with family,” says John.

Each person who lives at the Foyer has a designated support person who follows them through their journey and helps them achieve their goals. At the same time, the resident youth workers are responsible for establishing an ethos of independent living and the acquisition of skills as a basic tenant of the Foyer ‘offer’.

“Over 500 young people have gone through Oxford Foyer,” says John. “Those who have studied have done everything from chemical engineering to lab assistants to nursing.”

Consortium formed to build a Foyer in Wangaratta
March 3, 2022

‘They don’t treat you like a problem child’: Foyers a fix for youth homelessness – The Age
December 8, 2021