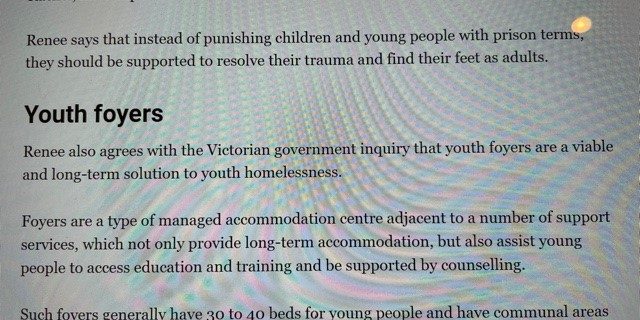 The crisis of homeless youth

Each night in the state of Victoria, about 6,000 other young people share Rachel’s experience of homelessness. Yet, many remain invisible to the wider community because, like Rachel, they often sleep at friends’ houses, in cars or in temporary accommodation, rather than on the streets.

Nationally, two out of five people experiencing homelessness are children and young people, many of whom are escaping domestic and family violence.

LGBTQ youth are also highly represented within the homeless population, with many running away from families who may not accept their gender or sexual orientation.

According to the youth homelessness organisation Kids Under Cover, children and young people experiencing homelessness are less likely to be attending school or able to get a job.

Like Rachel, many homeless youths will become involved in criminal activity with research demonstrating that the earlier a young person enters the criminal justice system, the more likely they are to be imprisoned as an adult.

As such, the inquiry made a range of recommendations regarding homeless youth, including the need for more early intervention, and better funding for support services such as youth foyers.

‘How can you go to school when you’ve got nowhere to live?’

Renee Peterson is a team leader at Vincent Care, an organisation that provides services to homeless youth. She is also Rachel’s case manager.

Renee began working in the sector due to her own experiences, becoming a mother at the age of 17 and moving around in temporary accommodation with her first child.

“I didn’t have an easy childhood,” she said.

Renee says that youth homelessness is often underpinned by domestic violence, trauma, alcohol and drug use and sexual and physical abuse.

Like Rachel, most of her clients are involved with child protection, foster care and residential care, and many are from marginalised groups, such as the Indigenous, African or Pacific communities.

Renee agrees that stable accommodation is the first step towards resolving the complex needs of homeless youth. She also says that education is key, describing it as a “protective factor” for young people.

“[But] how are you expected to go to school when you’ve got nowhere to live?” she asked. “When someone becomes homeless they are not engaged with education because they are wondering where they are going to sleep.”

She says young people who are committing crimes and using drugs should be a “red flag” to the system, signalling that they have not had fundamental care and, like Rachel, have experienced childhood trauma.

Renee says that instead of punishing children and young people with prison terms, they should be supported to resolve their trauma and find their feet as adults.

Renee also agrees with the Victorian government inquiry that youth foyers are a viable and long-term solution to youth homelessness.

Foyers are a type of managed accommodation centre adjacent to a number of support services, which not only provide long-term accommodation, but also assist young people to access education and training and be supported by counselling.

Such foyers generally have 30 to 40 beds for young people and have communal areas where they will learn social, financial and other life skills in order to prepare them for independent adulthood.

The Foyer Federation states that their model is underpinned by a “deal” in which young people are “expected to actively engage in their own development and make a positive contribution to their community”.

This “deal” “empowers young people to take ownership of their future and to make lasting personal and social change”.

In Australia, the foyer concept is relatively new, with only 15 currently in operation. In the United Kingdom, where the model has been adopted since 2008, there are 135.

It is a model that Renee fully supports.

“[The foyers] are awesome,” she said. “They’ve got independent living but they’ve also got [an] on-site case manager, they’ve got group work, they are engaged in education, they’ve got counsellors there. It’s a wraparound support.”

Yet the foyer model has struggled to gain traction in Victoria.

When asked by Al Jazeera about solutions for young people experiencing homelessness, Minister for Corrections and Youth Justice Natalie Hutchins pointed to a 3.4 million Australian dollars ($2.5m) initiative to build 50 studios “to provide safe and secure accommodation for young people at risk of homelessness”.

Such studios are not related to the foyer model, and are, instead, small rooms built at the back of the home of a family member or carer.

This provides the experience of independent living yet allows the young person to still remain connected to and supported by their family.

Foyer Foundation strengthens board with 2 new appointments as we prepare for National growth.
January 25, 2023

The Foyer Foundation and the Brotherhood of St. Laurence in a new phase of support for Australian Youth Foyers
October 7, 2022
Go to Top